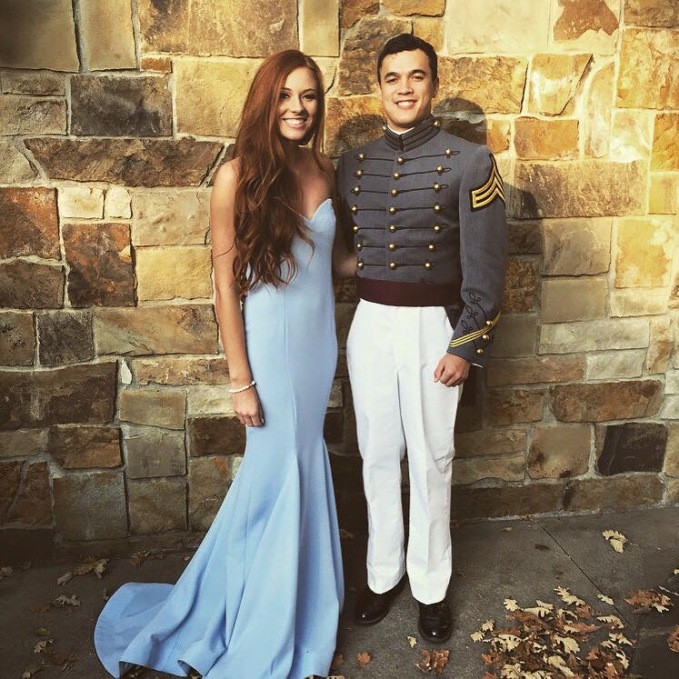 I’ve started a brand new chapter in Hawaii, but I figured I might share some recent history and some photos with you all from when Christian was still at West Point and I would visit him there and in New York City. ( Sorry for the quality of the photos that were taken before I got my wedding present – the lovely camera that I use now!)

Christian and I actually only met a few months before he had to leave for West Point, so we kept in touch through letters while he was at Beast (a military boot camp for West Point cadets) and only decided to officially date later that year. So actually long distance was all we really knew before we got married – though it doesn’t really seem like that because we were lucky to be able to visit each other so often. But the fact that we did long distance at all for so long seems crazy now because we spend so much time together. And it seems like it was FOREVER ago, even though we both just graduated from college last May. Sometimes we talk about how we don’t know how we ever did it. But really, when I look back I realize we kind of killed long-distance dating (false modesty definitely isn’t my thing), and that there were absolutely some plus sides to the whole experience.

For one, I truly learned how independent I could be and how to have zero qualms about being alone: studying, going to coffee shops and eating out at restaurants (seriously, I just bring a book) by myself. I did have lots of amazing friends in college, though, so maybe the going-it-alone thing was sometimes just more of a personal preference, but you see my point. 🙂 But I never once got into a rut where I just spent all of my time with a significant other, because that wasn’t even an option.

But one of the coolest parts about Christian going to West Point (for me) was that it taught me how to travel. I had never flown alone before (or really traveled at all), and the first time I had to was for an Academy Ball, and I remember being so scared I would get lost and end up getting stuck in an airport/ on some completely different plane/ in some random city. (It might sound irrational but if you know me it’s not super out of the question.) But I remember Christian’s mom, who’s a wonderful, independent and amazingly competent woman – “boss” is really what comes to mind – telling me that I’d be fine and that I just needed to do it once, and then I’d be a pro. And so I did. And she was right: I continued to fly and travel solo for the next four years, to military balls at West Point, to California to meet up with Christian at his track meet, and just to visit the city on a whim when West Point cadets had “pass” for a weekend. The military balls were some of the best times I’ve had, and were seriously a dream come true for my romantic, old soul (and for my obsessive need to buy formal dresses). The blue and red dress above were both from Lulus.com (shop via affiliate link!). I literally have a closet full of dresses from Lulus because I adore their clothing so much.

And, fun fact: I fell in love with Christian the first time we ever danced, so that particular West Point tradition was always special. (He is such a good dancer, it kills me).

I also think that Christian and I got to know each other so, so well while he was at West Point because we were long distance, and had to spend so much time talking, first through letters and then over the phone. West Point is no walk in the park – Christian never took less than 18 credit hours a semester and usually took somewhere around 20, and the math and engineering focus makes it even more difficult (I would’ve actually died) – and so I think we got even closer by learning how to deal with being apart and handling the conflicts/stresses that arose, and with not having a ton of time to just spend together idly. It made the weekends we got to see each other full of sparkles and magic and appreciation. (But despite the travel and big-event weekends, I definitely do prefer getting to be more low key about our time together now that we see each other every day.) You find ways to get through; that was what my experience with Christian at West Point was all about.

“I will always remember those four years as a time of self-discovery, new love, New York, and fabulous dresses”

It was also lovely to visit the Academy because it is so steeped in tradition, and I always enjoyed meeting other cadets because they are typically just remarkably talented, well-rounded and hard-working people. The work ethic it takes and their hearts for service… I could seriously go on and on about it.

My favorite thing to do when we would visit was to literally just walk around everywhere, with no particular destination in mind besides a restaurant we wanted to try. We once ate Belgian waffles loaded with strawberries, Nutella and whipped cream at a food truck in Central Park; delicious Italian near Times Square; the best Croque Madame ever at a tiny little French restaurant, Filipino Chicken Adobo for Valentine’s Day (Christian is half Filipino and it’s his favorite dish) and so much more. The FOOD, you guys. Sometimes food is the true love story. I loved shopping and then wandering until we ended up at Bryant Park, my favorite place – it’s right next to the New York Public Library. I would live there if I could.

One of my favorite memories, of all time, forever, was when Christian and I accidentally ordered a bottle of pretty nice wine (I think we tried to ask for just one glass) at the Bryant Park Grill. We were sitting outside just people watching and talking, eating appetizers and sharing that wonderful, accidental bottle of red, and it started to rain even though it was sunny and beautiful out, so waiters came around and put everyone’s table umbrellas up for them. We just sat there in the sunshine-rain (my favorite weather) buzzing from the wine and from time spent together and because we were in New York City, in a park surrounded by so many interesting people, and in love. I remember that after we finished eating, the rain miraculously cleared up and we spent the rest of the day lounging on the grass, reading our books. I’m so glad we have a picture of that day.

Bryant Park will always be on my list of places, and so will New York, where nights don’t have to end until 4 a.m. and days begin early with a double-shot coffee fix. No one cares (or even notices) what you wear or if you dance around singing Frank Sinatra’s New York, New York. Not that I did that. (Okay I did that. A lot).

Isn’t it funny how you don’t realize how good one chapter of your life was until you reach the next? Sometimes I think nostalgia is a liar. I could make a pretty good case for that. But other times I’m convinced we just need to slow down and take things page by page, savoring the happy, little moments before they become memories.

I will always remember those four years as a time of self-discovery, new love, New York, and fabulous dresses.

And channeling an interesting mix of Blair Waldorf/Carrie Bradshaw at literally every turn.

Affiliate link: Shop Lulus and enjoy $15 off + Free Shipping on US orders over $150 – Use promo code ‘take15 at checkout. Click here!